Just east of the coastal city of Awaba is Wadi Rum, the largest valley in Jordan. With towering sandstone arches and sweeping red desert dunes, this area is roughly the size of New York City. The beautiful landscape was actually carved naturally into the surrounding granite and sandstone.

Wadi Rum has been home to many cultures since pre-historic times with many leaving their mark in various forms of outdoor art that include petroglyphs, graffiti, and rock paintings. In fact, some of these inscriptions are believed to date back as far as 12,000 years. 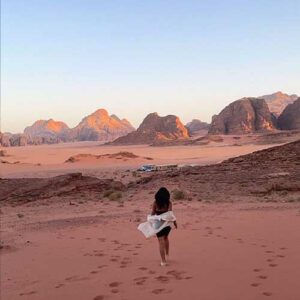 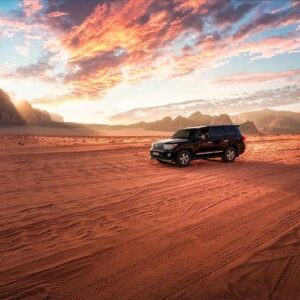 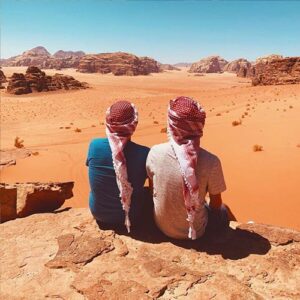 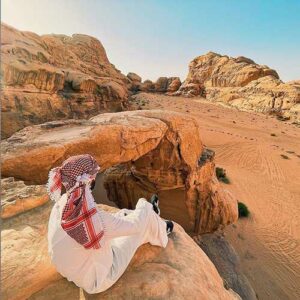 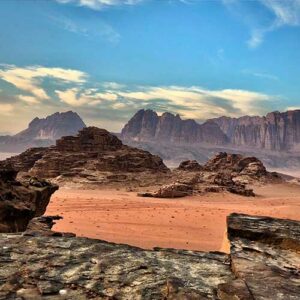 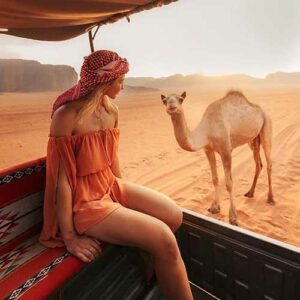 A number of cultures have called Wadi Rum home dating back to ancient times, including the Nabataeans and Bedouin. Over the millennia, Wadi Rum has gone by many different names including “Valley of Light or Airborne Sand” as translated from the Arabic. It’s also been called “Valley of the Moon” as well as “The Roman Valley” thanks to the surrounding Roman-inspired architecture.

In the modern age, Wadi Rum became a popular tourist destination after it was featured as the backdrop for shots in the film Lawrence of Arabia (1962), based on the novel by T.E. Lawrence who was stationed in the area for the British Army during the Arab Revolt of 1917.

Wadi Rum is a great place to visit if you’re a film buff. It’s a popular shooting location for many different films and is often used to portray Mars on the big screen. Tour the area and you’ll find shooting locations for films including Prometheus (2012), The Martian (2015), and Star Wars: Rogue One (2016). It was also used in Disney’s live-adaptation of Aladdin (2019) and Star Wars: Episode IX (2019).

As mentioned, the film Lawrence of Arabia was filmed in Wadi Rum and it’s actually left an impact on the area in more ways than one. Lawrence Spring is just a short distance away. It’s named after T.E. Lawrence himself and offers incredible views of the dramatic red sand and open desert the area is known for.

Another homage to T.E. Lawrence is the Seven Pillars of Wisdom, a rock formation named after his autobiographical account of being a British soldier during the Arab Revolt. This rock formation can easily be seen from the visitor’s center and can be reached with a short hike.

Make sure to stop at the highest peak in Jordan when you’re in the area, Jabal Umm ad Dami. If you visit on a clear day and make it all the way to the peak, you’ll catch amazing views of the Red Sea and the Saudi Arabian border. It's breathtaking to say the least.

Another stunning natural sight is Burdah Rock Bridge, the tallest natural arch in Wadi Rum. It can be climbed in a morning for some fantastic views. To make a day of it, bring a picnic lunch to enjoy after, then head to Um Fruth, a second arch that’s only a short walk away.

If you’re interested in seeing an impressive number of ancient petroglyphs and inscriptions that the area is known for, take a visit to Khazalu Canyon. The first 100 yards are easily accessible by foot but if you want to continue exploring, you’ll need some rock-climbing experience and equipment, both of which can be rented.

For a large collection of Nabataean and Thamudic petroglyphs, including ancient drawings of camel caravans, take a trip out to the Anfishiyyeh inscriptions. This collection is on the side of a mountain, but it is well worth the trip if you’re interested in seeing what these ancient civilizations left behind.

The best way to get around Wadi Rum is a jeep tour. You can get a good idea of the area a single day, but if you want the full experience, you should spend at least two days. And pairing up with a local guide is a great way to get a more in-depth tour if you have a few days to spare.

Eco-adventure tourism is big in the area, including activities like rock climbing and trekking along the ancient Bedouin Roads. You can explore with a local guide or pick up a guidebook documenting various paths you can take.

There are also several options for camping and glamping. If you like to rough it under the stars, the area offers Bivouac camping for a minimalist experience. Stay in remote fire-lit campsites that provide unbelievable views of the starry night sky that you can’t get anywhere else. The vast plateau is open, unpopulated, and free from light pollution, delivering an unforgettable experience.

For a camping experience that’s a bit less rustic, take a look at some of the tourist camps in the area. A nice variety of options are available, some more luxurious than others. Regardless of which you choose, you can expect to find communal bathrooms, kitchens, and dining areas with private tent cabins that can sleep between two and six people. This experience is nearly Bedouin style, although you generally have access to electricity to charge your phone and camera, as well as solar heated showers.

If you prefer something with all the modern conveniences of home, try the Bait Ali Lodge. Located just outside of Wadi Rum, the Bait Ali not only has indoor plumbing, but they also offer suites with air conditioning, swimming pool access, and restaurant dining. If you still want a little bit of an outdoorsy experience, try one of their tents or cabins.

Wadi Rum is classified as a desert climate, which means the weather is dramatically different depending on the time of year. But generally speaking, April through September are the hottest months, while January is the coldest. Note that September is also the high point of the rainy season.

The main tourist season is both March through May as well as September through November. Before planning your visit, keep in mind that some of the activities offered in Wadi Rum rotate seasonally. But you can travel to Wadi Rum at any time of year with the right preparation. And you'll be glad you did – this is a worthy Bucket List location for any world traveler.