GET A FREE QUOTE

We are here to help. Check out our FAQ or Contact Us.

Sitting to the east of the Dead Sea in western Jordan is the breathtaking Wadi Mujib canyons that tower along forty miles of the Mujib River, which flows into the Dead Sea. This iconic sandstone gorge has become a worldwide tourist destination, especially for those looking for both a challenging and exciting trip. There are countless opportunities to explore the canyons along the river amidst some of the lowest elevations on the planet, where you’ll spot local wildlife, hike in rough terrain, and swim in crystal clear water. And all the while, there’s no shortage of ways to relax and take in the history of the region. 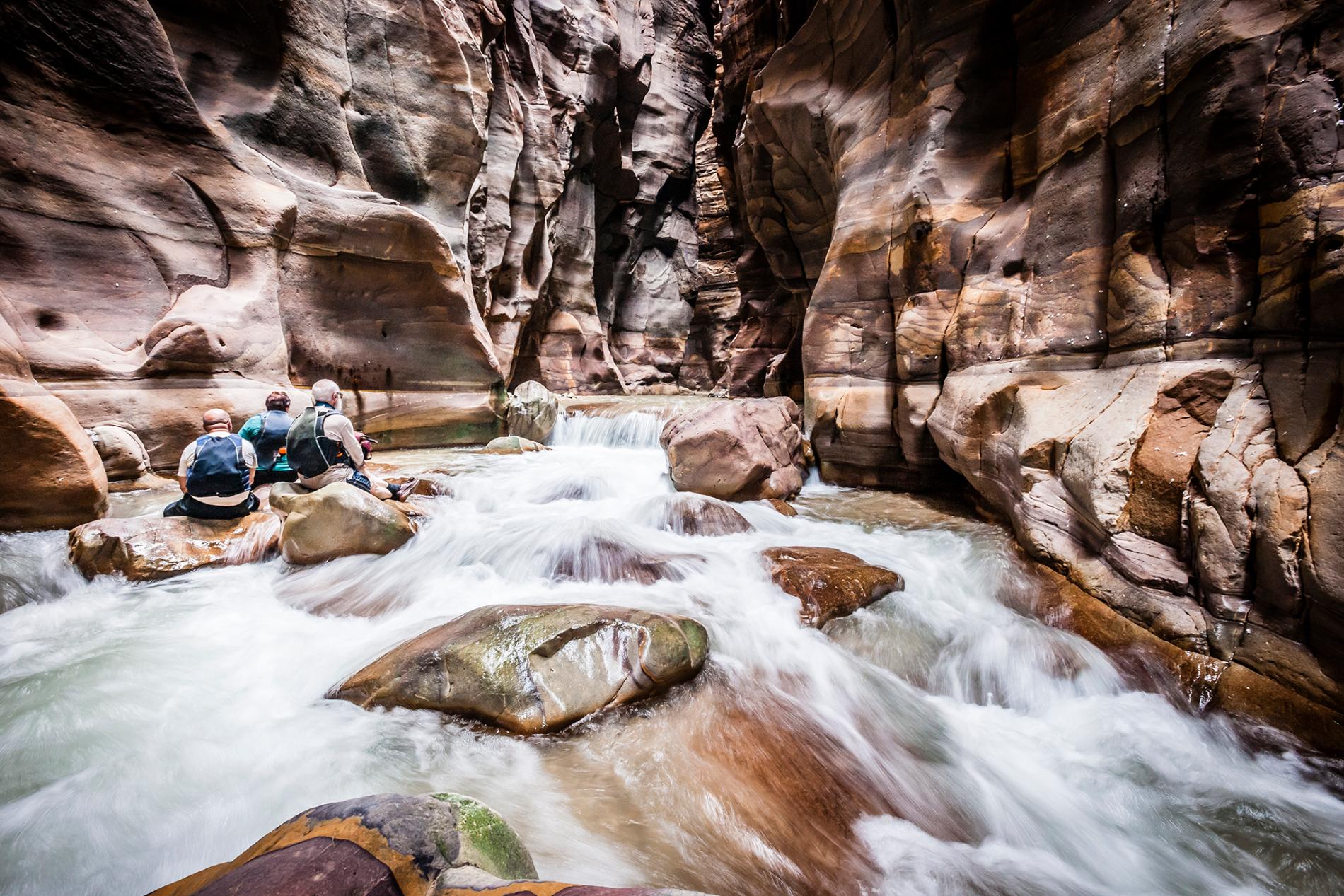 Like so many places in the Middle East, Wadi Mujib has historical significance that relates to both Biblical history and some of the earliest known civilizations. For starters, the Hebrew Bible refers to the Mujib River as the “River Arnon,” which would make the Wadi Mujib the “Arnon Valley” or the place where Moses is believed to have led the Israelites.

Wadi Mujib has also been known as a common border for rival civilizations. It once served as the border between the Kingdom of Moab, a civilization often in conflict with the Israelites, and the Amorites, an ancient people based in modern-day Syria.

Following the Hebrew settlement, Wadi Mujib served as a critical barrier between the Moab Kingdom and the tribes of Gad and Reuben. And today, it serves as a destination for travelers and tourists.

Aside from the natural beauty of the sandstone canyon and various waterfalls found along the Mujib River and its tributaries, the greatest feature for visitors to see in Wadi Mujib is the wildlife. The drastic changes in elevation combined with the year-round water flow of the seven tributaries that feed into the Mujib River make it an area of incredible biodiversity, with over 400 distinct plant species, around 200 permanent and migratory bird species, and more than 250 animal species of all shapes and sizes.

The ideal place for spotting both the flora and fauna is the Mujib Biosphere Reserve, which is located along the southeast coast of the Dead Sea. The reserve was initially established as a way to assist with breeding the endangered Nubian Ibex, as well as a host of other animal species that have found a suitable habitat in the remote mountains and valleys, including the striped hyena, Syrian wolf, Blandford’s fox, and the caracal, a lynx-like known for its long, tufted ears.

Bird spotters will also love exploring Wadi Mujib. There are dozens of bird species that make their permanent home in this part of the world, as well as plenty of migratory birds who use Wadi Mujib as a stopover between Africa’s Great Rift Valley and northeastern Europe. Several species of vultures are among the more prominent birds found in this region. Visitors may also hope to catch a glimpse of the Dead Sea Sparrow, Arabian babbler, sooty falcon, Hume’s owl, and the sand partridge, just to name a few.

What You’ll Do: Hiking

It’s worth noting that bird spotting and wildlife sightings are mostly a side attraction to the real reason why so many people visit Wadi Mujib – the hiking. There are so many opportunities for tourists to partake in guided group hikes that allow them to take in everything that Wadi Mujib has to offer. It’s worth noting that these planned hikes are not for people with a fear of heights or who are uncomfortable wading in water that could be chest high. But for those looking for some adventure, get ready for some of the most thrilling hiking on the planet.

The terrain of the Wadi Mujib can vary in elevation from nearly 3,000 feet above sea level to over 1,000 feet below sea level, which is what makes the hiking such a challenge. Even the shortest hikes will take several hours and require a fair amount of bravery and conditioning from the participants. However, the perks and rewards of hiking on any number of trails in Wadi Mujib will make it well worth it.

Hiking trails can be the best way to spot the Nubian ibex and other forms of wildlife in their natural habitat. Certain trails will also offer breathtaking views of both the sandstone canyon and the Dead Sea. With that being said, perhaps the best reward is the opportunity to swim in the waters of the Mujib River and some of its tributaries. Amidst the rocky terrain are deep pools filled with crystal-clear water, a natural way to cool off in the middle of a challenging hike and enjoy yourself in such a scenic location. There are even opportunities to climb up on the rocks before plunging into the cool water. And who doesn’t love cliff diving? 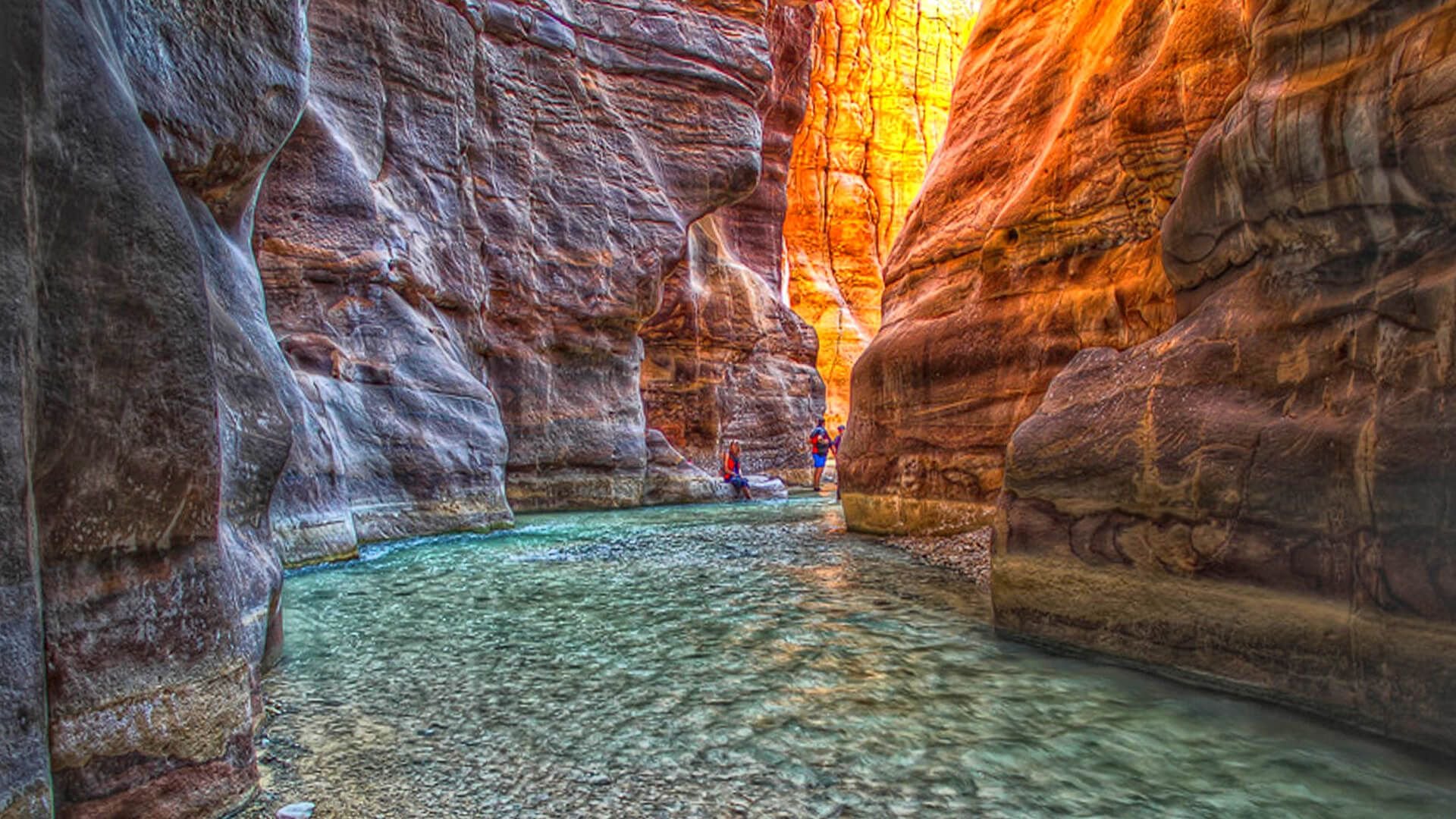 When you’re not conquering the trails, there are plenty of ways to rest and relax in Wadi Mujib. Not far from the Mujib Biosphere Reserve is the Ma’In Hot Spring Resort. Located more than 800 feet below sea level, it boasts thermal hot springs, waterfalls, views of the canyon and the Dead Sea, massage services, fine dining, and more. It makes for a great “best of both worlds” experience with both the outdoor excursions and the indoor pampering.

When to Go: Between April and October

There’s almost never a bad time to visit an enchanting oasis like Wadi Mujib. However, it’s typically recommended that visitors go between April and October. The Mujib Biosphere Reserve has three wet trails that are only open during those months, whereas their two dry trails are open year-round. It’s also worth mentioning that summer temperatures can be a little extreme for some people, which is why April and May are the ideal months to visit.

But if you don’t mind missing out on the wet trails, the months of February, March, October, and November are also good times to enjoy the almost everything else, all while avoiding the summer heat. To each their own!