GET A FREE QUOTE

We are here to help. Check out our FAQ or Contact Us. 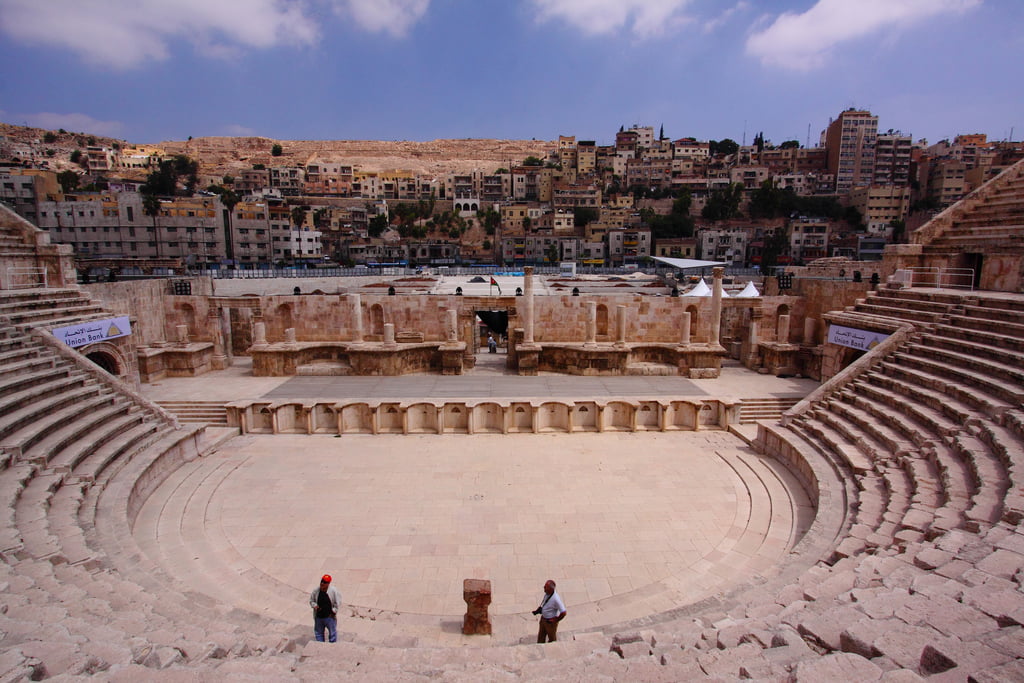 At one time during the world’s history, the Roman Empire dominated much of Europe and Asia. As a tribute to the reigning world dynasty, Romans constructed a theater in the 2nd Century that is now considered one of the most popular tourist attractions of the Middle East.  Consisting of 6,000 seats, the Roman Theater sits in the Jordanian capital city of Amman. The theater and nearby Odeonare face the recently built structure called Hashemite Plaza, with the Roman-inspired Nymphaeum situated a short walk away southwest of the hallowed theater.

Constructed during the reigning era of Antonius Pius, the Roman Theater is nestled into the hillside facing the Jordanian capital. The stage area faces north to prevent the sun from affecting the vision of visitors to the world-renowned structure. Three horizontal sections divide the seating arrangements for visitors that soak in the stunning architecture. Soon after completion of the Roman Theater, side entrances at ground level led to another stage, as well as the primary orchestra section.

The highest section of seating and the furthest from the stage is considered “the gods” seats, because the acoustics actually make the sounds from the stage crystal clear from that section, and the view is just spectacular.

Today, Jordanian dignitaries use the theater as a venue for hosting events, like the Amman International Book Fair and the Amman Marathon prize ceremony, as well as performances from local and international musicians

Things to See at the Roman Theater

Restored in 1957 to bring the structure of the theater up to Jordanian safety codes, the Roman Theater represents the most impressive structure left over from the Roman Philadelphia period. As the highlight for many visitors to Amman — especially visitors from Europe and North America — the theater spans more than 6,000 recently refurbished seats.

Also, two prominent museums sit on each side of the theater, both worthy of exploring:

Spanning several floors that adjoin the Roman Theater, the Museum of Popular Traditions opened to the public in 1971 at the height of tensions between Israel and neighboring Arab countries. Myriad artifacts from every region of Jordan comprise the Palestinian Folk Heritage Collection, and five exhibition halls housing artifacts devoted to different regions of Jordan.

Annual Events Around the Roman Theater

Amman has earned the reputation for hosting some of the most heavily attended art festivals in the world. For example, tens of thousands of visitors attend the Amman Summer Festival held in King Hussein Park. The high energy combination of art, dance, and music provide visitors to the area with a nice contrast to the more subdued ambiance at the Roman Theater.

Every May, you can view the graffiti artwork shown during the Baladk Street Art Festival, and July ushers in the annual Franc-Arab Film Festival that presents French-Arab movie productions.

And if you visit Amman in November, check out the European Film Festival, which presents films not yet released to the public.

The Best Time of Year to Visit

Like most regions of Jordan, the Roman Theater sits in an area that delivers hot, dry air from mid spring through the end of October. If you have ever visited the desert plateaus of Arizona during these months, then you understand the type of climate defining the region where Amman and the Roman Theater are located.

The Roman Theater opens every day at 8 am and closes at 10 pm.