Petra, an ancient city whose ruins lie in southwest Jordan, was inhabited as far back as the Paleolithic Era (9,000 BC!) and was at one time the center of the Arab kingdom. Once an important part of the spice trade, the bustling city changed forever when an earthquake forced people to leave in 551 AD. Petra remained largely hidden to the Western world until the 1800s, and excavations in the 1950s exposed more of Petra’s rich unknown history, leading to the city becoming a World Heritage Site by UNESCO because of its extraordinary natural, historical, and cultural significance to the world. 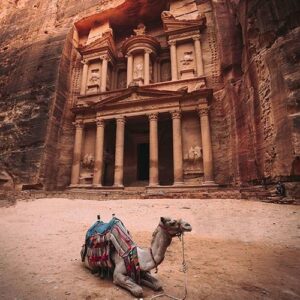 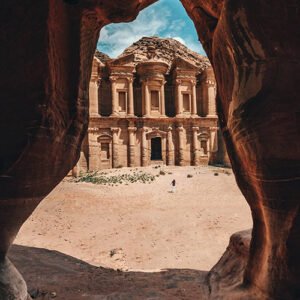 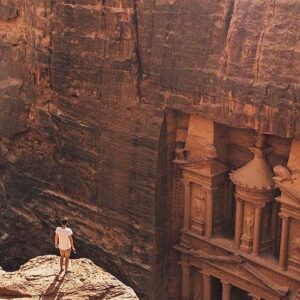 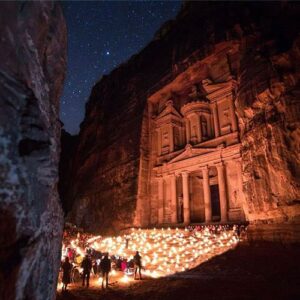 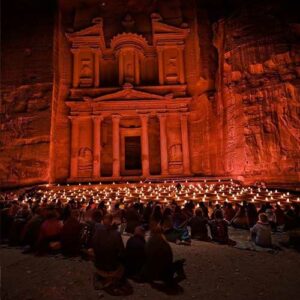 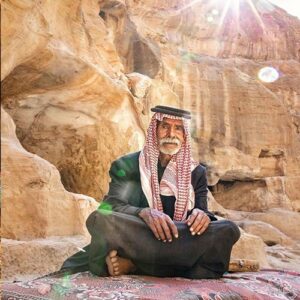 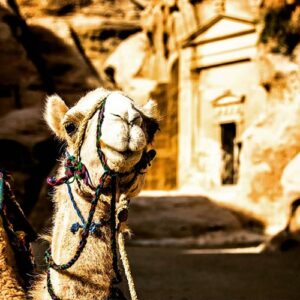 The ancient city of Petra was the center of the Arab kingdom during Hellenistic and Roman times. It sat on a terrace in the Wadi Mūsā, or Valley of Moses, one of the places where Moses was said to have received water from the rock in the Bible.

On either side of the valley are large, towering sandstone cliffs with veins of red, purple, and yellow running through them, natural colors that are used by local vendors to make keepsake sand art.

Petra was first inhabited in the Paleolithic and Neolithic periods and it’s also known that the Edomites occupied the area around 1200 BC. Hundreds of years later, an industrious Arab tribe called the Nabataeans took over and made Petra the capital of their kingdom. The city flourished under Nabataean rule, becoming the center of a spice trade route that included China, Egypt, India, and Greece.

When the Romans defeated the Nagayaeans in 106 AD, Petra was absorbed into the Arabia province of the Roman Empire. Under Roman protection, the city continued to flourish for some time – until changes in trade routes led to a gradual decline. Then, in 551, an earthquake caused people to leave the city en masse.

Flash forward to 1812, when Petra was unknown to most of the western world, when a Swiss traveler named Johann Ludwig Burckhardt infiltrated the city. At the time, it was occupied by Bedouins, and Burckhardt was undercover as an Arab scholar. The records of his travels prompted other western explorers to explore Petra, most notably Scottish artist David Roberts, who created detailed drawings of the city in 1839.

Interest continued to spread and excavations by the British School of Archaeology in Jerusalem began in 1958. Their discoveries plus those uncovered later but the American Center of Oriental Research added a lot to what we now know about Petra and its ancient population. Today, interest and tourist activity continue to grow.

Petra is an archaeological park and entrance fees are a little more expensive than other attractions in Jordan. That said, you could easily spend an entire day or two here hiking and exploring. There are guides available for hire at the Visitor’s Center, most of them born and raised in the area with a wealth of knowledge to share. If you want to head out on your own, you can also rent an audio guide (Easyguide) from most hotels, which provide commentary in several languages

The first thing you see when entering Petra is the Siq, a long and winding sandstone canyon with gorgeous color patterns along the walls. There are some minor carvings throughout the Siq as well as remnants of the terra cotta pipes built into the sides of the canyon that were once a part of the ancient city’s extensive water system.

After making your way through the Siq, you’ll come to the Treasury, a grand structure with various columns and statues carved into the facade. Look closely to see the urn at the top of the structure – rumor has it that the Pharaoh’s hidden treasure in contained in this urn. Then look even closer: you can see bullet pockmarks from where Bedouins over the years have tried to gain access to it.

Continuing past the Treasury, you’ll walk down the Street of Facades until you reach the Roman Theater. It was originally built by the Nabateans, then was expanded by the Romans to hold up to 7,000 people. And it's still used for some performances today!

The largest carved monument in Petra is The Monastery. It was made in the 1st century AD and to reach it, there are 800 steps to climb. The walk can take almost an hour, but this is one of the most impressive structures in the city and is worth seeing if you're able to walk it. (It's a bit hard to imagine visiting Petra without taking the climb, but we don't all have knees of steel.)

Petra by Night is an event that happens every Monday, Wednesday, and Thursday evening. Admission is separate from a day pass and can be bought at most local hotels. You’ll see parts of Petra by candlelight, watch a short presentation of Bedouin music, and stop at the Treasury, where you'll sit down on mats and have tea. While this experience is not the same as seeing the grandeur of Petra during the daytime, it’s a nice way to spend an evening and gives you a different perspective of the city.

Petra is a great place to visit for long hikes with gorgeous views. One route is up to the High Place of Sacrifice, a spot at the top of the mountain where actual sacrifices were once performed. The rock altars are still there and you get a beautiful view of Petra from above. Head down the back side of the mountain for more carvings and tombs not usually seen by the public. The round trip takes around two hours, two and a half at the most.

If you’re looking for a longer, even more interesting hike, head to the top of the Mountain of Aaron, the highest peak around Petra. To get started, go past the Monastery and head up the mountain. At the top of the climb is a small church as well as the tomb of Moses’ brother, Aaron. There are multiple paths to choose from, and the trip can take anywhere from 4 to 8 hours to complete.

The Best Time to Go

Petra is open year-round and can be visited any time as long as you properly prepare for the weather. Spring and fall are the most comfortable times to visit because they’re drier with more moderate temperatures. If you're planning on doing a lot of hiking, those seasons are most likely your best bet.

Other Times to Visit Petra

Summers are extremely hot and dry and can be irritating to people with dry skin or who are prone to nosebleeds. If you visit in the summer, be sure to drink a lot of water, put on sunscreen, and use petroleum jelly or some other protecting moisturizer as necessary.

December, January, and February are pretty warm during the day but, as Petra is in the mountains, the temperature can drop significantly at night. Take gloves, hats, and coats with you at this time of year and don’t go out if the forecast is calling for rain. Downpours are common and the valley can quickly begin to flood.