The Dead Sea is one of the saltiest bodies of water in the world, with a reputation for making “swimmers” simply float on its surface. And it may not be the saltiest, but it is the deepest hypersaline lake in the world, and it got its name from its salt concentration as well. As large as the Dead Sea is, plants and animals are unable to survive its salty depths.

And few things are as scenic, surreal, relaxing, or extraordinary as floating on the surface of this expansive, barren body of water.

Bordered by its eastern neighbor Jordan, and western neighbors Israel and the West Bank, the Dead Sea is a popular day-trip from Aqaba or Amman, with plenty of nearby attractions worth spending the day exploring. However, the variety of local hotels and resorts make the Dead Sea worthy of a full vacation destination. 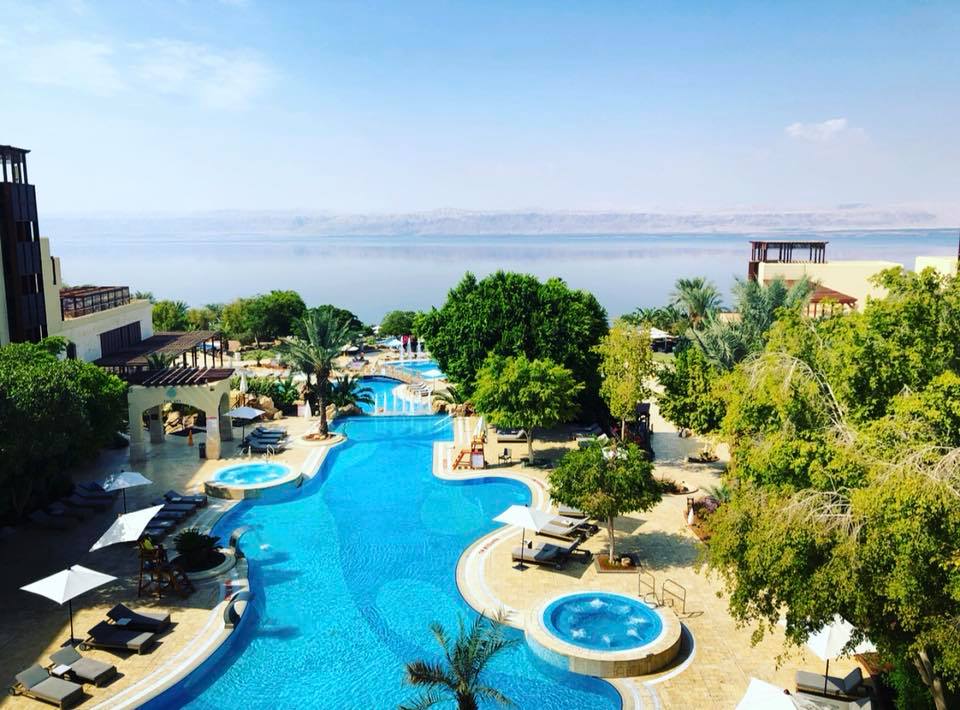 The Hebrew Bible has a record of people dwelling in caves around the Dead Sea as far back as before the time Israelites came to Canaan. The Ancient Romans called the Dead Sea “Palus Asphaltites,” referring to it as an Asphalt Lake. Some discovered the natural asphalt that floated to the surface, and harvested it with nets. For example, Ancient Egyptians were regular customers because they used the asphalt to embalm their mummies.

The Dead Sea was an important route for trading, as ships carried around salt, asphalt and agricultural items from either side of the sea. It was also a place for Jewish people to settle in caves between 150 B.C. and 70 AD, leading to the eventual discovery of the historic Dead Sea Scrolls. These were manuscripts left near the Dead Sea, containing lots of historical and religious history. These scrolls were discovered in the late 1940s and early 1950s and currently housed in the Israel Museum.

The Dead Sea is also home to the world’s lowest roads, which are at 1,289 feet below sea level.

A bird-watcher’s paradise, Mujib Reserve is a UNESCO World Heritage site that can be traversed via adventurous hiking trails along sandstone canyons. Natural swimming holes, awe-inspiring wildlife spotting, and more abound, and the Mujib River runs straight into the Dead Sea.

Just a fifteen-minute drive from the Dead Sea, Mount Nebo is a historic attraction that offers a panoramic view of the Holy land as well as an impressive view of the Jordan River valley. At the top of the mountain, you will see the remains of an excavated church, and a monument for the biblical story of Moses and the bronze serpent.

The Baptism site is another popular location located at the Jordan river. Archaeologists claim this spot, just a ten-minute drive from the Dead Sea resort area, to be the site where John the Baptist baptized Jesus. Visitors are bussed down to the river basin, where they can look out at the Jordan River and excavated remains of the baptism site. Visitors can dip their feet in the waters, but a baptismal robe is required.

The Dead Sea Panoramic Complex/Dead Sea Museum is accessible by car, but difficult to reach with public transportation. The museum is full of information about the history of the Dead Sea, as well its geological and ecological features. It has a wonderful view of the Dead Sea, and even has a restaurant with cliffside views.

The Hammamat Ma’in is a series of waterfalls and natural hot springs, and some have been channeled to create pools and baths for tourists to explore in. There is also a spa resort located near the waterfalls, making this area its own remarkable getaway you won’t want to leave.

Of course, the first thing visitors tend to do when they arrive at the Dead Sea is hop in. With its high salt content, it becomes nearly impossible to sink, and most just float on the surface of the water. However, you should only float on your back, because swimming regularly is more difficult and tiring, and the salt can cause extreme pain if it comes in contact with your eyes. If you end up swallowing the water, it can cause medical issues related to the high salt content. Just a heads-up!

The mud on the shore of the Dead Sea has lots of minerals, and many visitors like to cover their bodies with it for the therapeutic effects. It’s believed that the reduced ultraviolet radiation, higher atmospheric pressure, and high mineral content all can contribute to specific health benefits. For example, mud pack therapy is suggested to temporarily relieve pain in the knees associated with osteoarthritis. You’ll probably see plenty of crystals and salt deposits along the shore as well, which can make for a fun time walking around looking for souvenirs.

There are also spas and resorts around the Dead Sea, offering unique experiences. Zara Spa has swimming pools, including a heated pool for winter, jacuzzis, fitness centers, and many cafes and bars. The Al Wadi Resort has changing rooms, freshwater showers, a pool, and a restaurant. If you are in a resort, it’s a good idea to wash the salt off in the beach showers before using your towel, because it will get salt all over your skin if you use it after showering, which can leave behind an uncomfortable itch. Just another heads-up!

Any time you are able to visit the Dead Sea is a great time, but there are some seasons that are better than others in regards to safety and comfort. Summer months get very hot, reaching temperatures around 104 degrees on a hot day. This can be very uncomfortable for many tourists, so springtime or autumn would be a better time to visit because the temperature is more controlled. If you are up for the heat wave, summer is still a beautiful time to visit.

The Dead Sea is very sunny, but the low altitude and atmosphere make the sunlight’s effects weaker. Sunbathing carries less risk of burning, but normal precautions should still be taken to prevent damage from the sun. Rainy days tend to only occur in the winter, if at all. Overall, the area receives about 330 days of sunshine each year, significantly more than even the sunniest parts of the US.

There is a risk of flash flooding during the winter and spring. This is an important aspect to keep in mind as you plan your trip, because the basin fills from far away areas that can unexpectedly flood the Dead Sea. Even if the weather is sunny in the Dead Sea, other mountains could be sending rainwater into the basin, causing an unexpected flood. Be sure to check the weather forecast if you go during a riskier time, as they will always warn people of a possible flood. If there is a warning, do exactly as they recommend to stay safe.

In the winter, low temperatures are around 50 to 60 degrees, making the lake a viable place to visit and float in. Spring and autumn are the mildest seasons to visit the Dead Sea, with temperature highs still ranging between 80 and 100 degrees, which are great conditions to travel around and see what the Dead Sea has to offer.