Located about 6 miles northwest of Madaba, Mount Nebo is a 3,300-foot elevated ridge with particularly strong ties to the Hebrew Bible. As mentioned in Deuteronomy, Mount Nebo was where Moses saw the promised land before he died. While it’s certainly an important destination for Christian and Jewish faiths, it’s also a breathtakingly beautiful place that’s an essential stop for anyone visiting the region. In addition to stunning views of some of the area's most significant places, Mount Nebo also provides a close look at ancient architecture and mosaics dating as far back as the 3rd and 4th century. 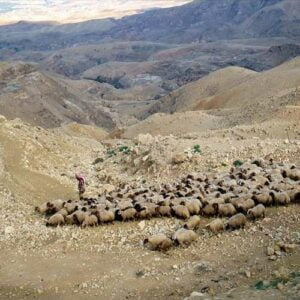 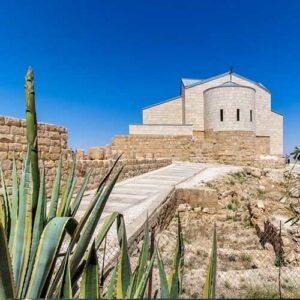 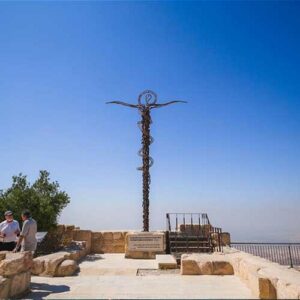 While a lot of cities and landmarks in Jordan have Biblical ties, Mount Nebo is a particularly important location in the Old Testament. Moses ascended Mount Nebo to view the Land of Canaan. Here, he was told by God that he would not enter the land before dying on the mountain. Moses is said to be buried here, although the exact location is unspecified. Mount Nebo also makes an appearance in 2 Maccabees (an ancient text written in 124 BC) as the home of the cave where Jeremiah hid the tabernacle and the Ark of the Covenant.

Considering its biblical significance, it’s not surprising that Christians made Mount Nebo an important place of pilgrimage. As early as the 3rd or 4th century, monks built a church in tribute to Moses on Siyagha, one of the ridge’s tallest peaks. Religious interest has stayed strong in the modern era, too. Not only has the church has been renovated and restored several times, but prominent religious leaders are also making a point to visit. Pope John Paul II planted an olive tree next to the old church as a symbol of peace in the year 2000 and, in 2009, Pope Benedict XVI visited, giving a speech before taking in the stunning view toward Jerusalem.

Today, Mount Nebo is home to an active monastery and the Franciscan Archaeological Institute, as well as a popular stop for religious pilgrims and tourists alike.

Rising about 2,300 feet over the Jordan River Valley, Mount Nebo offers some of the most spectacular views you’ll find in the region. From the summit, you can see panoramic views of the area and, on a clear day, catch a glimpse of the valley of the River Jordan, the Dead Sea, the West Bank city of Jericho, and the Holy City of Jerusalem. This view is the same one that Moses saw in the Old Testament, which is commemorated with a modern statue created by Italian artist Giovanni Fantoni. The Brazen Serpent monument represents the bronze serpent created by Moses and the cross upon which Jesus was crucified.

The monk's church that was built to honor Moses was enlarged in the 6th century and thrived for about 600 years until it was eventually abandoned in the mid-1500s. The site was excavated by archaeologists in the 1930s and elements of the original structure have been incorporated into the current church building.

One of the most interesting pieces of history on Mount Nebo is the mosaic flooring. It belonged to the original church and was discovered (after being hidden for 1,400 years) when the top layer was removed for restoration in 1976. An inscription dates the original mosaic flooring to 531 AD, and even includes the names of the 3 workers responsible for creating it so long ago.

This mosaic is in remarkable condition and is important for both its religious and archeological significance. It’s in the shape of a large square divided into four different scenes. The top sections consist of a shepherd fighting a lion next to a soldier defeating a lioness, and two hunters on horseback taking on a bear and a boar. The lower scenes are more peaceful and show a shepherd watching his flock graze among the trees and a man and young boy holding an ostrich, zebra, and camel by the leash. It's an absolutely must-see.

There are a lot of other mosaics along the walls as well, depicting animals, an elaborate cross, and the greeting, “Peace to all." Next to the entrance is another floor mosaic that marks the place where the monastery previously stood. This one features bulls and gazelles as well as various plants and flowers.

It doesn’t take too long to see Mount Nebo. You can take in the view and see all the mosaics in about twenty minutes if you move quickly. If you’d rather take your time and examine all the small details of the artwork and architecture, you should allow yourself about an hour. Either way, it’s certainly worth making the time in your itinerary to see it, if only for the stunning view.

To get the most out of a visit to Jordan, a visit to Mount Nebo is usually done as part of a tour that includes other nearby spots of interest. Short tours are typically offered that include Mount Nebo, Amman, and Madaba and can be extended by adding a stop at the Dead Sea. For a longer trip, you can make additional stops in Petra and Al-arak.

Another place to include in your trip to Mount Nebo is La Storia, a museum a little more than a mile away that can easily be visited on your way to or from the area. La Storia is a nice compliment to what you’ll see at Mount Nebo because it covers the historical, religious, and cultural influences of the region. Exhibits include life-sized sculptures telling the story of Noah’s Ark, the destruction of Babylon, Moses parting the Red Sea, and the last supper. The Islamic era is covered, as well as the history of Jordan itself. You can even make your own small mosaic, and get sneak peek at the museum's efforts to create the largest mosaic in the world.

The church on Mount Nebo is open year-round, from 8 AM to 6 PM in the summer and 8 AM to 4 PM from October to March. Although travel to Mount Nebo is possible at any time of year, it’s best seen as part of a tour, which may dictate when you’ll be visiting. June, July, and August are a good time to stop, as there isn’t a lot of rain. Cloudy skies are notorious for negatively affecting the view.

Mount Nebo is easily accessed by car and a lot of travelers use taxis to get here. Weather isn’t much of a factor, but please bear in mind that the elevation causes a slight drop in temperature. If visiting in winter, you may need a light jacket or wrap.