In the center of downtown Amman is the Citadel, an important historical location because of its long history of use throughout several prominent civilizations, including the Romans, Byzantines, and Umayyads. Even during periods of decline, it was used sporadically by Bedouins and seasonal farmers, making it one of the longest continually-inhabited locations in the world.

The Amman Citadel sits on the highest hill in the city and is surrounded by a 1700m-long wall that’s been rebuilt many times by the different civilizations that occupied it. Much of the site is enclosed behind fortified walls, but the evidence of occupation is vast. Archaeologists have been busy at the site since the 1920s, bringing teams from Britain, France, Spain, Italy, and Jordan – and even still, large parts of the Citadel remain undiscovered. 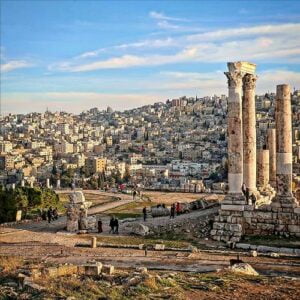 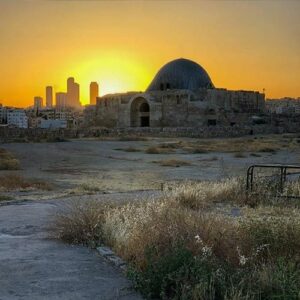 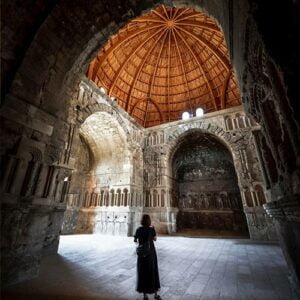 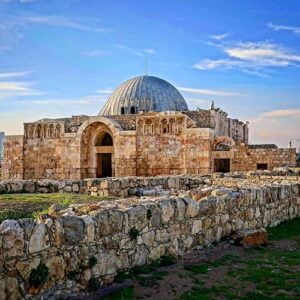 Although there are portions of the Citadel that are so far uncovered, evidence suggests occupation goes all the way back to Middle Bronze Age, from 1650 to 1550 BC.

As time moved on, it was occupied by the Assyrians, Babylonians, and Persians. The Greeks then conquered it in 331 BC and called it Philadelphia. Not many physical changes were made to the Citadel at that time, but pottery found at the site provides evidence for this occupation.

The Citadel came under Muslim control during the Umayyad period from 661 to 750 AD and a palace structure was added, likely used as the home of an important official or as an administrative building. It was done in the Byzantine style and may have been built upon an existing structure from an earlier era. In the 13th Century, the Ayyubid Dynasty was in control and added the watchtower.

One of the main structures at the Citadel is the Temple of Hercules. The two giant pillars are the remains of a Roman temple, built during the reign of Marcus Aurelius. In addition to the columns, you can also see parts of the podium as well as the remnants of a hand that was carved from stone, a hint at the elaborate carvings that would have appeared across the temple in its prime. You can also come here for a stunning view of downtown Amman.

Another impressive site is the Umayyad Palace. It’s believed to date back to 720 AD and was at one time an extensive complex of buildings that housed the governor of Amman. Unfortunately, an earthquake destroyed a large part of the palace in 749 AD and was never fully repaired.

Several parts of the palace are somewhat intact. The first major building you’ll see is the domed audience hall which was specifically designed to impress visitors. It’s shaped like a cross and is believed to mirror a Byzantine church built beneath it.

North of the hall is a wide colonnaded street, lined with columns and arches as well as both administrative and residential buildings. Continue north to the governor’s residence, complete with throne room.

To the east of the domed hall is the Cistern, a large circular hole with steps leading down to the bottom which would have been the water supply for the palace and all the surrounding buildings. In the center of the Cistern, you can see a disc on the floor. This was once the support for a pillar that would have been used to measure water levels.

A small Byzantine Basilica also lies to the south. It dates from the 6th or 7th century. Sadly, it’s been mostly destroyed by earthquakes, but there are still a few mosaics visible that are worth seeing firsthand.

And if you’re looking for a way to really enhance the trip, hire a multilingual, fully-licensed guide to take you around. They're usually stationed by the ticket office at the entrance, and they all have vast knowledge of the area.

The Jordan Archaeological Museum is also located at the Citadel. This small museum was built in 1951 and houses artifacts from archaeological sites all over Jordan. The artifacts are all arranged in chronological order and are primarily items used in the daily lives of the inhabitants of the area, including pottery, glass, metal tools, and statues. There are also collections of jewelry and coins.

Artifacts in the Jordan Archaeological Museum cover a very long period of time, ranging back as far as the Paleolithic Era through the Bronze Age and all the way through the current Islamic Era.

Not far from the Citadel is the Roman Theater, the largest and most impressive relic from when the area was under Roman rule and called Philadelphia. The theater is cut into the side of a hill and can seat 6,000 people. It’s believed to have been built in the 2nd century and was built with three different tiers: a lower section for royalty, a middle section for the military, and the top rows for the general public. The theater was restored in the late 1950s and it provides an astonishingly accurate representation of what it was like in its heyday.

If you're in Amman, the Citadel is an absolute must, giving you a glimpse through multiple ancient histories alongside immersive experiences and sprawling views.